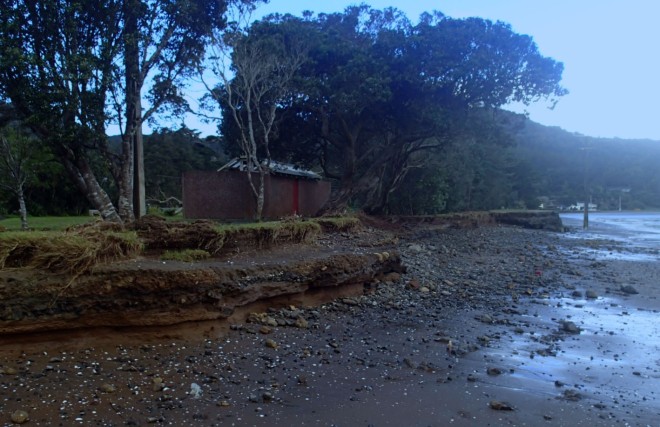 I posted previously about this issue.

Recent issues have arisen.  A Pohutukawa situated on the domain is not in a good way.  The officers had identified this and obtained an arborist’s report which described the tree’s plight.  The future does not look good.

The report includes this passage:

Approximately one third of the root system on the southern side of the tree has been exposed by recent coastal erosion. The erosion has also undermined approximately 50% of the tree’s root plate.

The significant loss of anchoring roots on the windward side of the tree and the undermining of the root plate has resulted in a substantial loss of the trees ability to stabilise itself under wind loading. This is also likely to result in die back of the tree’s canopy, which will be correlated with the amount of root loss.

Staff made an operational decision for health and safety reasons to cut the tree to the stump.  It posed a risk to nearby power lines and other infrastructure.  When the Waitakere Ranges Local Board learned of community concerns about the tree we asked for it to be discussed at the public meeting next Tuesday.

The local board has a history of advocating for and acting to protect trees since its inception.  We regard this as an important obligation and an important part of local environmental protection.