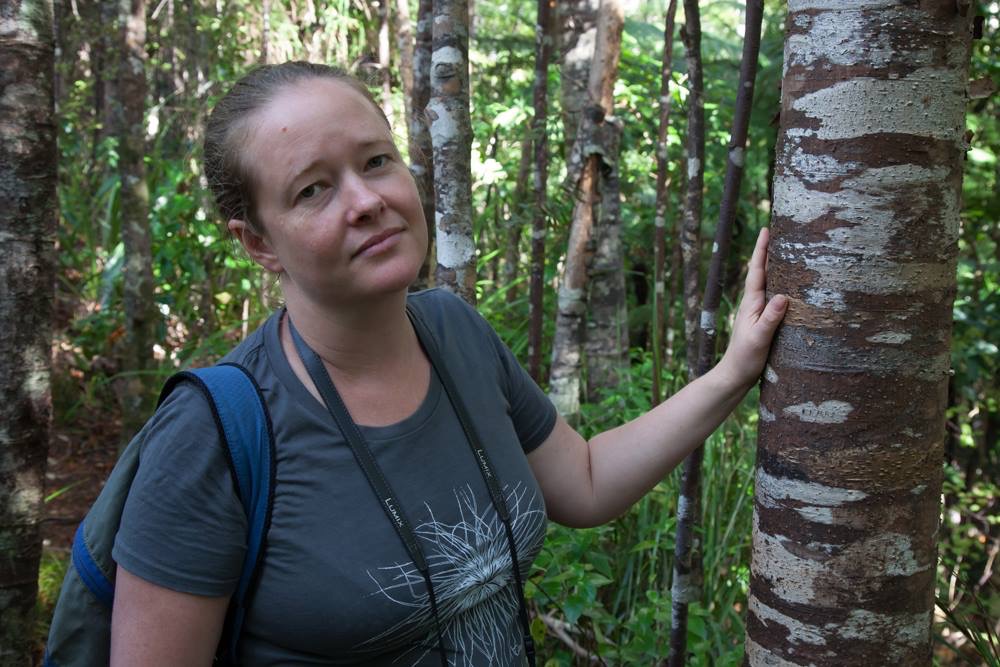 Kauri dieback is a scourge in Waitakere, particularly in Titirangi and the French Bay Paturoa area has a high concentration of trees affected by the disease.  One of the most prominent sites is the former home of Colin McCahon.  The Kauri on his property featured prominently in some of his art.  There are 21 significant Kauri on the site and many of them are affected.

The implications of the disease are terrifying and infection appears to be almost inevitably followed by the tree’s death.  So far no cure has been found and Waitakere faces the prospect of the gradual but inevitable extinction of the King of the forest.
Part of my job on the local board is to review resource consent applications and regrettably I am seeing them for the felling of diseased Kauri.  Some very dedicated westies in Titirangi have applied very reluctantly to have Kauri felled for safety reasons.
There is hope.  There is ongoing research into the use of Phosphite and results so far are promising.  While not curing the disease the treatment has lessened the symptoms of dieback and the general health of the tree is improved.  It is hoped that the treatment could add decades of life to affected trees.
From Radio New Zealand:

Phytophthora taxon agathis (PTA), the phytophthora pathogen that kills kauri, is widespread with the most recent tests confirming its presence in the remote Warawara forest in the Far North.

Plant and Food Research scientists have been injecting selected kauri trees in Northland and Auckland forests with phosphite, a chemical used by fruit growers to ward off phytophtera.

Team leader Ian Horner said the kauri injected with phosphite showed they were able to fight off the disease.

“When the phytophthora gets on to these trees you get these bleeding cankers at the base that spread up and around the tree and eventually girdle and kill it,” Dr Horner said.

“We’ve seen that where we’ve treated the trees with phosphite, these lesions stop and then heal. So that’s a very encouraging sign and shows the chemical is indeed working and helping the trees fight back against the pathogen.”

This is great news.  It underlines the importance of the Government and Auckland Council continuing with the trials and the keep Kauri standing program.  And rather than wait for the trees to die landowners could engage arborists to apply phosphite now although of course no guarantees of success can be provided.

There is concern that too much Phosphite may be toxic for the trees.  But I understand that apart from yellowing of the leaves no major effects have so far been measured.  And if a tree is dying then what is there to lose?

Continued research as well as education and publicity is vital.

So it is of deep concern that it appears Council has cut the budget for the Biosecurity Kauri Dieback unit, despite the urging of Councillors for the budget be maintained.  The unit is engaged in monitoring and advising and awareness raising and plays an important role in dealing with the problem.

Evidence comes from a official information release made to my friend Mels Barton.  The impression was created that funding for the unit was being increased from $304 thousand to $361 thousand per year and did the councillors want to cut this.  They said no.  This screen shot from the release of information from Council shows the figures.

It is  clear however that the funding has been being cut with Council funding going down by about $86 thousand.  For some unknown reason the 2015/16 figure included central government funding but the earlier figure did not.  The actual budget from Council was $219,000 which was a reduction.  This is why the project lost its field officer who was performing an important role.  Another staff member who left has not been replaced.  This is disappointing as their work is vital.
Proof comes from the further release of information which was made three weeks after the first:

This incident raises questions about why the two different figures have been used, one with central funding and one without.  And why in the midst of a crisis involving the king of the Waitakere forest attempt to save him are being stymied by budget cuts.